Kaelyn Buskey, Performance Director at Power Train Mechanicsburg, completed a Strength and Conditioning Internship with the Baltimore Ravens for their preseason training camp.

Tell us about your internship experience.

I would be there for their afternoon lifts. I’d get there around 2 PM. A couple of their athletes would be coming in for various workouts before they had their second practice of the day. They’d get a chance to look at their program cards so that we knew what their workout was going to be for the day and then get that workout set up for all three different position groups. They have lights, mids, and heavys that all do slightly different workouts. Steve has three staff members, so each one of those takes a position group. I usually jumped in to help coach during one of those position lifts. It was a really cool experience to see how coaching in the NFL actually works.

What were your biggest learnings and takeaways?

You have to be confident in the words that come out of your mouth. I am not one to be physically intimidated but there’s just something to be said when every person that you’re interacting with is six inches taller and almost a hundred and fifty pounds heavier. I believe that my message was received well because there was confidence behind it. I think that being female can be a bit challenging at times but if you’re confident, true to yourself, and believe in what you’re saying, I think that it will be received that way.

What was the biggest challenge you faced?

One of the biggest challenges was definitely just the environment I was in. No amount of preparation really prepares you to be in front of NFL athletes. I think that it just took time getting comfortable with being in those situations and realizing at the end of the day that these athletes are just people.

What were the biggest differences between your internship and training at Power Train?

Training in Baltimore is team training, so it’s the same workout for each position group. It’s one coach to about 12 athletes, so the coaching in that regard is a bit different. It’s the same workout and coaching cues, which was nice to be able to focus on one workout at a time. However, one of the benefits of Power Train is that we have that ability to individualize and specialize based on our clients. They all have different needs, goals and ability levels so with the small group atmosphere that Power Train has we really do have that ability to individualize and get our athletes and clients to accomplish their goals!

I have two! One was getting to see the players practice on the field at M&T Bank Stadium. I’ve been to professional football games growing up but those were always nosebleed seats. To be on the sideline at an NFL event, to be under the stadium, to be in the locker room, and to be around the players, that was probably the highlight of my internship. There were 23,000 people at that practice, not that any of them were looking at me, but just to be in that atmosphere and watch the fans get excited for the players that I got to work with was probably one of my favorite moments. My second was definitely watching Steve get to coach. It was amazing to watch him be so international with his coaching and to see the way he builds relationships and rapport with his players so they trust him and his system.

Take us through a day of your internship.

I got there around 1:30/2 PM. Usually by the time I got there all of their program cards were pulled for the day. Steve’s daughter and Coach Harbaugh’s daughter were both interns as well and there during training camp. The two of them had workouts that I would take them through and it was really cool getting to work with two Division 1 athletes. Then, as the guys would head to their walk-throughs we’d set up for their lifts so that they could get in and out. We would set the racks up, set their warm-up equipment up, and get all the equipment out that we needed. We had about three or four stations for each exercise. I would talk to Steve or some other staff members to go over their exercises just to make sure that I understood the coaching cues and tempos. We had two lifts – offense and defense. It flip-flopped which one lifted first. One would come in to get their workout in and then we’d flip-flop. After we were done we would set up for the groups coming in the next morning at 6 AM. Then I got dinner in the cafeteria and went home!

What qualities does it take to excel in this role/field?

You’ve got to be able to take criticism. I think everyone says that that’s what you have to be able to do to succeed as a professional but taking criticism in my opinion means having someone look at you and say here’s a better way to do this, “here’s a better way to communicate, here’s a better way to listen.” I think that those are definitely points of my growth as a professional here at Power Train and as a coach in general. Second, you’ve got to find mentors. I’m fortunate enough to have a couple here at Power Train that I look up to and communicate with frequently. I’m also learning that it’s important to find mentors outside of your traditional professional scope because they present new perspectives. Last thing is you can’t ever be satisfied with your progress. You’re always looking to grow, you’re always looking to improve, you’re always looking for a different way to look at something, a different way to solve problems. One of the easiest ways to stop developing is when you get this siloed approach, meaning you put the blinders on and think that it’s your way or the highway. I think that’s the fastest way to failure and the way people stop growing.

Did you have any specific projects or ownership?

The one day I got to take the quarterback position group through their workout which was an awesome experience!

What is something that surprised you about the NFL training industry?

The approach that these NFL athletes had as players was that this is their job. This is what they get up and do for a living. Getting to experience what strength and conditioning as part of your employment looked like was something different that we don’t get to experience here at Power Train. At the end of the day, this is a requirement of their job, so it was cool to see how this changed their entire mental approach.

What advice would you give to others who are seeking personal training internships?

Make connections. Make connections with other people in the industry. Whether that is strength coaches or business professionals, you’ve got to make connections. You have to put yourself out there. I would not have had the opportunity to work with the Baltimore Ravens if I did not get a job at Power Train. Our owner and founder is the head strength and conditioning coach at the Baltimore Ravens. There are not many other gyms or other personal training companies that get to say that. Working at Power Train, I have the opportunity to learn how to run a successful business. I learned how to program and now I program effectively for people of all different needs, whether that’s elite-level athletes or whether that’s adult clients looking to lose weight. You learn how to do that, and you learn how to successfully work with a staff and deliver results. There aren’t a ton of other places where you get those kinds of opportunities. So the biggest pieces of advice: make connections and work at Power Train.

How did the Raven’s training compare to Power Train training?

I walked into this thinking that I was going to see these NFL athletes do these absolutely insane workouts. They are some of the best athletes on the planet and there were going to be exercises that only these athletes were able to do. I was completely surprised to find out that there wasn’t a single exercise they did that we haven’t had a client do at Power Train. They aren’t out here doing these crazy lifts. It is the same thing we do at Power Train, they just move a lot more weight. The basics and foundations that we do work both here at Power Train and at the NFL.

Can you talk about being a female in this industry?

As a female, I was ready to fight the uphill battle. Am I going to be taken seriously? Are these guys going to listen to me? Am I really prepared for this position? I would not have been prepared for this position if I had not worked a Power Train. I also give all the credit in the world to Steve and the Ravens organization for building the culture that anyone working on that training floor was worthy of being paid attention to, listened to, and treated with respect. It was definitely an empowering experience to go in there and effectively communicate and coach NFL athletes. 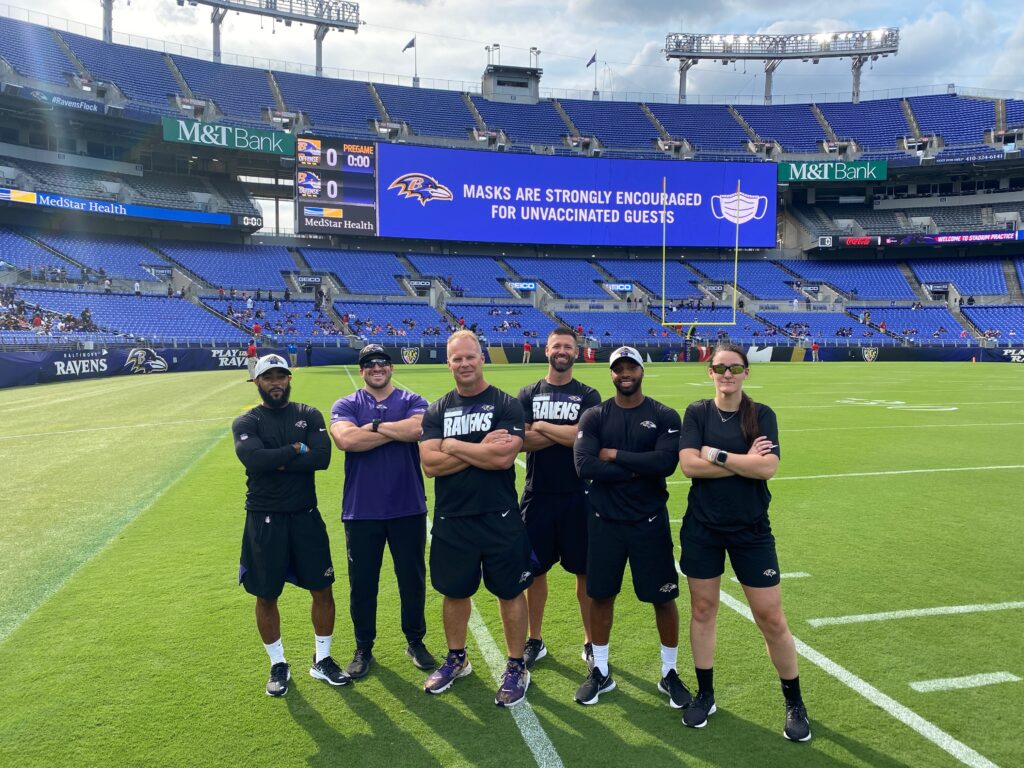 Train with Coach Kae at our Mechanicsburg location